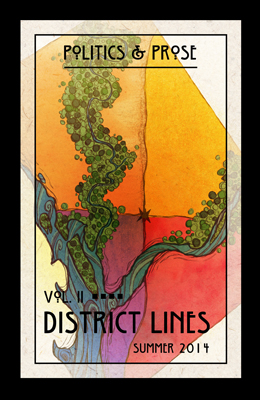 I am beyond thrilled to announce that my short story, Getting to Tufte, was recently published in Volume II of District Lines, from the venerable DC bookstore (and now publisher), Politics & Prose.

Here’s a taste of the story…

Having neglected to turn on either the baby monitor or the alarm clock, Melissa Lisstrom woke late to hysterical children who were convinced, since she did not tiptoe in at their first stirrings, that she must be dead. Traumatized, they refused to tell her whether they wanted oatmeal or granola. Things overflowed: the coffee, the diaper. Leaving her children to scowl at unwanted yogurt, she rushed upstairs and realized that the dress she had picked out the night before was ridiculous. She tossed on the best skirt ever and tried five different tops to go with it. With a whisper of regret for her telecommuter’s uniform of pajamas and fuzzy socks, she grabbed her one designer jacket (hand-me-down; sister-in-law). She felt both professional and artsy.

It’s a fantastic collection of local work.  You can buy it here.

Big thanks to everyone at Politics & Prose – I couldn’t be more delighted.

One thought on “Short Story: Getting to Tufte”